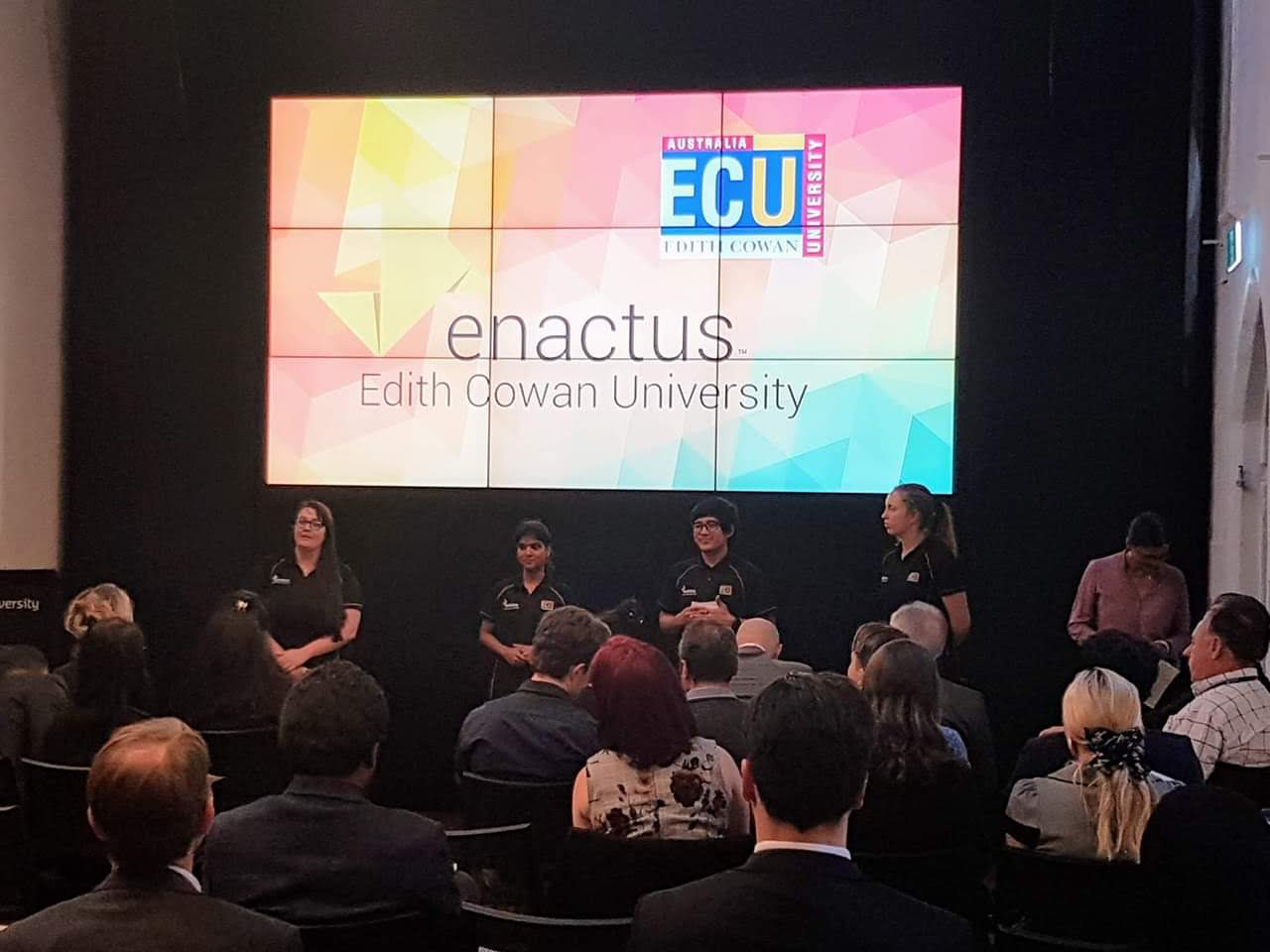 Enactus Edith Cowan University (ECU) presented projects, NetUni and BeSafe, at the Regional Showcase on the 3rd of May at St Georges Terrace which was also attended by the teams from University of Western Australia (UWA) and Curtin University.

At 9am, the morning of the Regionals, the Enactus ECU Faculty Advisor, Arron Jackson, shouted coffee for us anxious ECU students while we discussed how cold it was and our group presentation for the showcase. Everyone was nervous- I was nervous and my only job was taking pictures for our Facebook page. One of the main causes of the nervousness could be argued to be the sense of responsibility the team members felt as we all had some sort of role in the presentation.

Stephanie Fyfe, Bhavishya Gowtham, Ralph John Carlos and Racheal Tannahill would be the ECU presenters and Mohammad Bilal Shaikh switched the slideshow. Arron advised the group and helped organise the team for the event and Chaminda Ranasinghe, a former Enactus president, had given up his weekends to offer his wisdom to the group. Piyush Lalwani, Jessica Rowan, BoYuan and Benita KC Pant each gave their support and audience for the presentation.

The building the Regionals were held was owned by Curtin and had a wide staircase and doors. The inside was made up of several big rooms and a kitchen. The room next door was long and wide and resembled the set up of a church; with rows of long wooden bench seats which faced the back of the room where the presentations would be held at 2pm.

“The event was lovely, thanks to the organisers.  It was great to have industry people there providing input and constructive suggestions,” said Professor Maryam Omari.

“As it is with this stage of the competition the focus is on preparing and polishing presentations and making sure information is pitched at the right level at the competition.  This is why participation in the showcase is so important as it allows all WA teams to come together, present and receive constructive feedback to take the team to the next level.  The sense of comradery within and amongst the teams always stands out for me.”

During the workshops, we had a meet-and-greet with professors, industry professionals and the other universities, learned about preparing for job interviews and how we could implement and change our practice in our team and projects.  ECU, UWA and Curtin also worked on slogans for current projects. ECU’s NetUni slogan became “Making digital education a right to everyone in Western Australia while lifting members of the community out of unemployment”.

Wine and champagne were served after the ECU, Curtin and UWA presentations, which were judged and given feedback by industry experts and professors such as Maryam Omari. The teams, professors and others who attended got to know each other some more towards the end of the evening after the event finished at 5pm.

The Regionals highlighted some new priorities for Enactus ECU, such as KPI management in the team, to develop new partnerships, and to conduct surveys with the public to build on quantifiable information and statistics in our projects. Leaders of the ECU, UWA and Curtin groups have also agreed that our groups should become more integrated with each other.

Learn more about the projects discussed by our ECU team at Regionals on the BeachSafe and NetUni pages.